In this podcast, Brenda Hetrick, CRO of Matrix, shares an insider viewpoint on how process, technology, and consumer behavior are propelling the automation evolution of ad buying and selling. Listen in as Brenda interviews key industry leaders that are not only deep in the trenches of the evolution, but integral and influential to driving it forward in the Matrix Means Media podcast.

Fill out the form on the right to subscribe to the latest Matrix Means Media Podcasts today.

Listen in to this special podcast edition where Matrix’s own Sandy Gardner met up with Michael Spiesman, VP of Sales and Marketing for Allen Media Broadcasting and Heartland Media Group, and two Account Executives (AE’s) from WLFI, Lafayette Indiana, Thomas Steiner and Ron Schuessler, to chat about Matrix’s media-specific CRM and Sales Intelligence ad-sales platform, Monarch, how it fits into the daily life of an AE, and the benefits that come from using the platform. Click here for more information on how your and your organization can benefit from Monarch as well!

Listen in to the June Media Ad Sales Summit Candid Conversation, focused on the challenges and opportunities of broadcast media groups as they become not only bigger, but emerge as the driving engines behind a wide range of synergistic cross-media enterprises. Brenda Hetrick (Matrix Solutions) moderated this discussion with Tom O'Brien (The Weather Group/ Allen Media Group), Brian Lawlor (E.W. Scripps) and William Sally (Nexstar Broadcasting Group).

Listen in as Matrix's CEO, Mark Gorman, and CRO, Brenda Hetrick, talk to JDA.Media's President, Angela Betasso, as she discusses how she got to where she is today, as well as how her past experience as both a National Seller and Local Seller are influencing her new role at JDA.Media. The trio also dives into how sales discipline has served as a key differentiator throughout the challenges presented over this past year.

Listen in to the February Media Ad Sales Summit Candid Conversation where we sat down with the two media agency executives who account for the majority of local media ad spend from the buy-side to find out what's working, what's not - and what lies ahead. Join Matrix, CRO, Brenda Hetrick as she moderates the no-holds barred conversation with Kathy Doyle, EVP, Local Investment, MAGNA Global and Jennifer Hungerbuhler, EVP/MD, Local Video & Audio Investment, dentsu. Make sure to catch the pre-game conversation with Brenda and Matrix CEO, Mark Gorman before the Candid Conversation kicks off!

Listen in as Matrix's CEO, Mark Gorman, and CRO, Brenda Hetrick, talk to MediaOcean's SVP, Business Development, Fraser Woollard to discuss all things ad operations - the good, the bad, and the ugly. More specifically hear how today's tech companies are innovating to move the needle on reducing the friction between the buy and sell sides when it comes to media advertising. Additionally, the trio gets candid on combining linear and digital to serve audience and reach effectively and the industry's evolution to omnichannel buying and what that means for existing and future workflows.

Listen in to hear Matrix CEO, Mark Gorman, join top leaders of some of the most influential media companies today, including Steve Pruett (Executive Chairman of the Board, CMG/Apollo), Emily Barr (President & CEO, Graham Media), and Pat LaPlatney (President/Co-CEO, Gray Television Inc), as they kick off the New Year with an executive-level view, discussing what's ahead for the local broadcast television business in 2021.

Listen in to catch the Candid Conversation 'pre-game' session with Matrix CEO, Mark Gorman, and CRO, Brenda Hetrick - and then you get to listen in on Brenda's exclusive conversation with the industry's foremost forecaster and champion, MediaVillage founder Jack Myers, as we turn the page on a most unprecedented year in media and set our sights on the prospects for ad sales in 2021.

Listen in as Matrix's CEO, Mark Gorman, and CRO, Brenda Hetrick, talk to The Jim Pattison Broadcast Group's, VP of Sales, Shannon Havard, and Forever Media's, VP of Sales, Mike Sherry, to hear how these two industry leaders are helping advance their respective digital audio businesses and opportunities in 2020. Both share candid insights on how they are evolving: Shannon talks to bringing a digital agency in-house and embracing podcasts as an extension to their business, while Mike shares the significance of staying true to and knowing your audience and thinking outside of the box in what is the original form of 'social media'.

Listen in as Magid's Jill Rosengard Hill and The Vertere Groups Tim Hanlon discuss recent survey insights on the current state of consumer viewing – behaviors, attitudes, preferences, likelihoods – with a pre vs. post Covid comparison of media consumption, and how this current state of consumer viewing will impact the fast-changing business of “television” in the months and years ahead. Don't miss the 'pre-game' session with Matrix CEO, Mark Gorman, and CRO, Brenda Hetrick, before the Candid Conversation kicks off!

*This Candid Conversation did include a presentation with slides discussed throughout. In order to watch this conversation and see the slides, you can also register for and access the on demand version here!

Listen in as we discuss a topic once seen as an unachievable Holy Grail. Our panel of industry leaders converse about addressable advertising’s ability to target TV/video audiences more finely in data-driven addressable environments and how it is rapidly approaching economically attractive scale and technically dependable execution. We discuss the state of addressability with sellers at the forefront with a stellar panel moderated by Matrix's own Brenda Hetrick and joined by Kim Kelleher (President, Advertising Sales & Partnerships, AMC Networks), Gina Mingioni (SVP Strategy & Operations, Comcast), and Kelly Abcarian (General Manager, Nielsen Advanced Video Advertising Group, Nielsen). Don't miss the 'pre-game' session with Matrix CEO, Mark Gorman, before they dive into this topic too!

Listen in as we discuss how AWM had to adopt a new MO to deliver a virtual Gracies event to an expanded audience and pivot their focus to be able to better engage and inspire members in a year where the pandemic tried to steal center stage. Matrix' CRO, Brenda Hetrick and RISE Marketing's Deanna Kennedy talk with AWM's Keisha Sutton James and Becky Brooks about the Alliance for Women in Media's (AWM) MO for 2020 and going forward.

Listen in as we discuss finding our way to a 'new normal' with the TechBaes. Hear how 'Flexibility' has become the new "F" word amidst a time where virtual is the new norm and change has become the one true constant. Brenda Hetrick, and co-host Deanna Kennedy, get candid with TechBae co-founders Christina Villano, and Heather McCrea to discuss what the TechBae organization has been up to, how they are fairing personally and professionally during the pandemic, and of course what's on the horizon!

Listen in as Scripps' VP of Sales, Local Media, Missy Evenson chats with Matrix's CRO, Brenda Hetrick and CEO, Mark Gorman about measurement, moving the industry forward with speed and technology and how at the end of the day it starts and stops with 'good content'. How can we effectively come together to automate? Let's start to solve for the things that absorb all the back and forth, like makegoods and really change the business rules!

Listen in as Brenda Hetrick and Matrix’s CEO, Mark Gorman chat with Blue Corona's CEO, Ben Landers, about digital advertising and more specifically attribution, the value of tracking results, how COVID-19 has impacted business, where the trends are, and more- including building a culture designed to execute vision from the ground up!

Listen in as Brenda Hetrick and Matrix’s CTO, Adam Gotlieb chat with Revenue Analytics’ President, Zach Cross about how ‘the time is now to do more with less’. Covering an array of topics, the trio talks to how Revenue Analytics has focused on being a hero for their customers during COVID 19, to the need to get data into the ecosystem and better leverage it across platforms, to a call for more automation, it’s all here.

Listen in as Brenda Hetrick interviews Genius's Rob Elder, to discuss all things ad sales, including how Genius is creating new solutions for their advertisers via partnerships, technology's role in the ad sales process, Genius's strategy for selling into multiple market verticals and more.

Listen in as Brenda Hetrick interviews Matrix CEO, Mark Gorman for a no-holds-barred conversation on COVID-19, producing a future-forward focused culture, expanding product capability, bringing intelligence to the forefront of the ad sales workflow, and delivering automation as the industry moves to impression-based selling.

In this podcast Brenda Hetrick, along with Matrix's CTO, Adam Gotlieb,  interview Hudson MX's Jay Stevens to discuss TIP Compliance and automating the ad buy / sell process at all levels and across all platforms. Furthermore, the group talks to how technology is evolving to advance the way we do business.

In this podcast Brenda Hetrick delves into how FreeWheel’s Sarah Foss got started in media, how technology and processes have and haven’t changed over the years, and where we as an industry are going when it comes to automating the ad sales process. 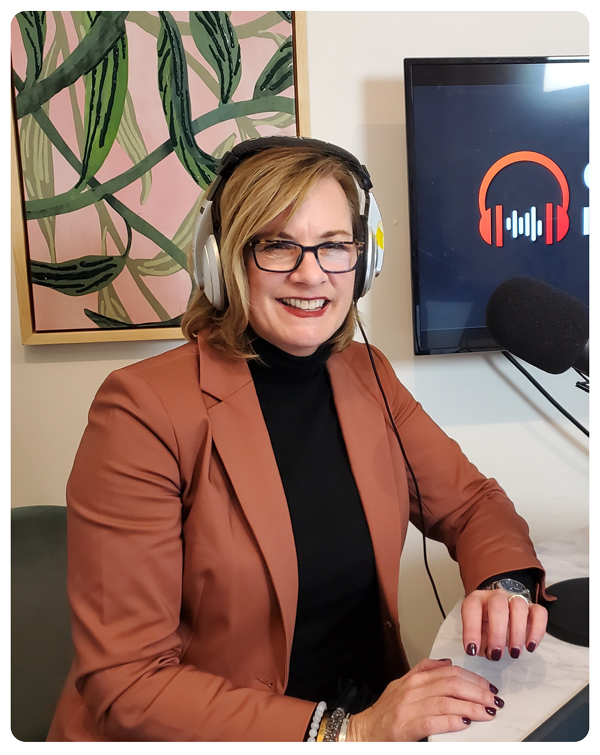 Brenda believes that growing a company to greatness is fueled by organizational passion for strategic and innovative solutions that drive revenue and align with overall business goals. She focuses her efforts on socializing the value of the Matrix Media Sales Ecosystem to prospects, customers, thought leaders and industry influencers!

As the Chief Revenue Officer, Brenda is responsible to conceive, develop and oversee the execution and success of all revenue-related operations including purposeful sales & marketing blueprints for the media industry.

Brenda holds a B.A. in Economics and Political Science from the University of Pittsburgh and an MBA from Robert Morris University.

Fields marked with an * are required